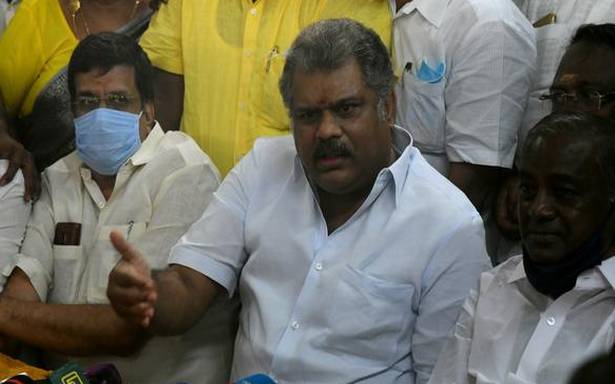 G.K. Vasan said he had the confidence and trust in the AIADMK leadership to allot the Tamil Maanila Congress the seats it has sought.

Tamil Maanila Congress (TMC) president G.K. Vasan on Thursday expressed disappointment over the number of Assembly seats offered to it by the AIADMK. He said the party has reverted to the leader of the alliance and is hoping that the AIADMK will enable the voice of the TMC to be heard in the State Assembly following the April 6 polls.

“We have asked for 12 seats. They have said that’s not possible and have offered us six seats. I have told them our position and we are waiting for them to call us. We have sought the seats and the constituencies only based on the prospects of our victory and no other calculation,” he said.

Mr. Vasan said he had the confidence and trust in the AIADMK leadership to allot the TMC the seats it has sought.

“As far as AIADMK is concerned, it is the leader of the alliance. The CM and deputy CM have successfully run the government for 10 years. We want them to come back to power for the third time and are supporting them. When we tell them something, they will discuss and call us. That is the right way and TMC has always been known for following the alliance dharma,” Mr. Vasan said.

He also said the party will continue its fight for the ‘Cycle’ symbol to be allotted to it till the last minute. “In Andhra Pradesh, Mr. Chandrababu Naidu is seeking that symbol, in Kashmir the Panther Party wants it and in Uttar Pradesh, Mr. Mulayam Singh wants it. If we get the opportunity [to contest on the Cycle symbol] and someone files a case, there is a possibility that the victory of our candidates might be stopped,” he said.