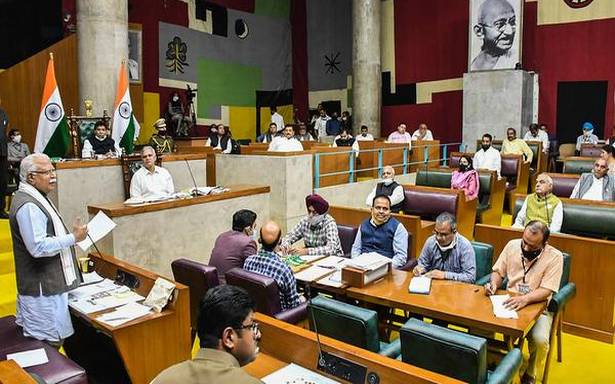 The no-confidence motion moved by the Congress against the Bharatiya Janata Party-Jannayak Janta Party coalition government in Haryana was defeated by 55 votes to 32. The legislators voted along party lines with two Independents — Meham MLA Balraj Kundu and Dadri MLA Sombir Sangwan — supporting the vote of no-confidence.

Before submitting her nomination, she held a road show for about a kilometre to the Subdivisional Office. Thousands of people took part in the event, which saw posters with the Trinamool Congress’ new slogan “Bangla Nijer Mein kei Chai” (Bengal wants its own daughter). Earlier in the day, the Trinamool chairperson visited a temple in Nandigram.

Tirath Singh Rawat sworn in as Chief Minister of Uttarakhand

Earlier in the day Mr. Rawat was elected the new Chief Minister of Uttarakhand by the BJP legislative party in Dehradun after the resignation of Trivendra Singh Rawat.

Opposition protest demanding repeal of the farm bills led to repeated disruptions of proceedings in Lok Sabha and ultimately its adjournment though the House passed a bill to regularise unauthorised colonies in Delhi.

Nationalist Congress Party MP urges Speaker Om Birla to refer to the Committee on Privileges Delkar’s allegations made in Parliament.

The Union Cabinet, chaired by Prime Minister Narendra Modi, has approved the Pradhan Mantri Swasthya Suraksha Nidhi (PMSSN), a single non-lapsable reserve fund for health from the proceeds of Health and Education Cess levied under Section 136-b of Finance Act, 2007.

It said 83.76% of the new cases are from Maharashtra, Kerala, Punjab, Karnataka, Gujarat and Tamil Nadu. India has reported 17,921 new daily cases in last 24 hours, according to data updated at 8 a.m. on March 10.

The Biden administration is seeking to bring violence to a halt and help form an interim government in the country. What is the Afghan government’s stand?

Why is Harry and Meghan’s son not a prince?

Russia’s state communications watchdog Roskomnadzor threatened to block the service completely and said there were more than 3,000 posts containing illegal content on it as of March 10.

Parliament proceedings | Only one bid received out of four coal mines put up for second attempt of auction: Coal Minister

The technical bid for the Kuraloi (A) North mine in Odisha was received from Vedanta Ltd and an Empowered Committee of Secretaries (ECoS) will take a final call on it, Coal and Mines Minister Pralhad Joshi told the Lok Sabha in a written reply.

England are seven points ahead of India, who were third before the away series against Australia. Australia’s 2-3 loss to New Zealand in a recent five-game series pushed the side below India with just one point separating the two.

Initially, the final was supposed to be held at the Lord’s.