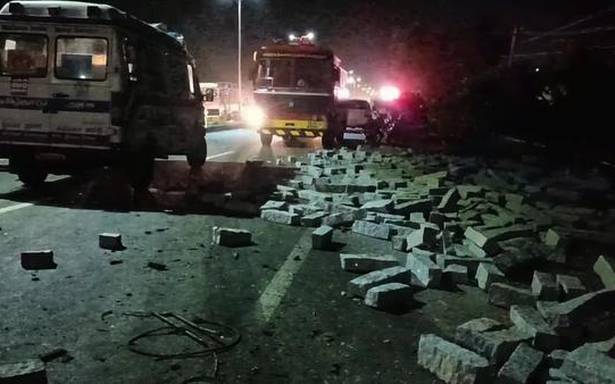 A stone-laden truck crashed into a parked septic tank suction truck, and two other trucks crashed into the vehicles, leading to a pile-up on the Dharmapuri-Salem highway early on Tuesday morning

Two persons were killed and 14 others injured in a pile-up involving trucks in Thoppur ghat on the Dharmapuri- Salem highway in the early hours of Tuesday.

The pile-up was triggered by a stone-laden truck ramming into a parked septic tank suction truck at Thoppur ghat a little past midnight. The Salem-bound septic tank suction truck from Hogenakkal had broken down, and was parked alongside Thoppur highway. Twelve workmen from Tiruchi and Virudhunagar were fixing the truck, when a stone-laden truck from Krishnagiri, headed to Salem, lost control and crashed into the parked truck. Another truck transporting potatoes from Gujarat and headed to Avinashi, along with a container truck that was closely following it, crashed into the pile-up of vehicles, aggravating the accident.

The driver of the septic tank suction truck, Rathinavel of Tiruchi and the driver of the stone-laden truck, Sidhayan from Edappadi in Salem, were killed on the spot. Fourteen others, including the workmen that were attending to the repair of the parked truck were grievously injured. The injured were rushed off to Dharmapuri government medical college hospital.

The pile-up led to several hours of traffic derailment, and was eventually cleared by Thoppur police. The site of the accident was inspected by Deputy Inspector General, Salem Range, S. Maheshwari and Dharmapuri Superintendent of Police C. Kalaiselvan.