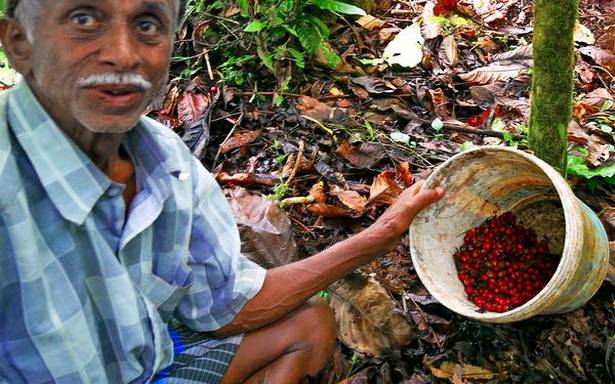 “My year-long hard work has gone in vain,” says A.B. Krishne Gowda from Karnataka’s Chikkamagaluru district, as he picks coffee berries that dropped from the trees following the unseasonal rain.

From his five-acre farm at Attigere near Kottigehara in Mudigere taluk, he was expecting 200 bags of coffee this year. But the recent rain has taken away 150 bags. “My loss would be around ₹6 lakh,” he says. Like him, hundreds of farmers have lost their crops in the last four-five days due to heavy untimely rain. Many lost the beans kept for drying. Bapu Dinesh, also a coffee planter, said sudden rain washed away coffee beans spread on the drying yards.

The farming community in Mudigere have already gone through difficult times in last two years. The area witnessed heavy rains and landslides in 2019 and 2020.

Bhaktesh, a paddy grower, had spread the harvested paddy on the ground for drying a week ago. “A day after, rain started,” he said. He was expecting a yield of at least 15 quintals. “I will hardly get three-four quintals now.”

A majority of paddy growers in the region cultivate the crop for consumption and not for the market. Now, they are forced to purchase rice from the local market.

Unseasonal rain in the Malnad and coastal belt in the last week has hit processing of arecanut too. Once the harvested arecanut gets drenched, its prices fall, say farmers in the region.