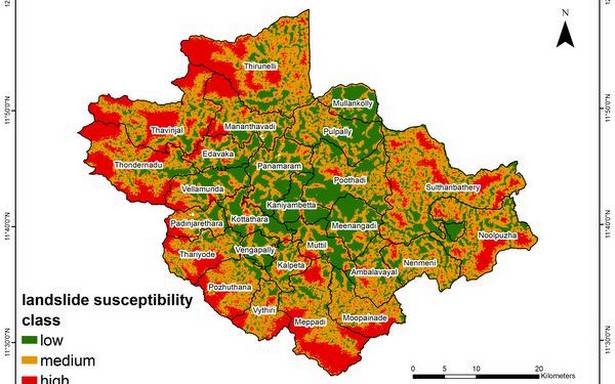 While the State has been struggling to address the repercussions of repeated events of extreme heavy rainfall, the localized weather forecasting system launched jointly by the Hume Centre for Ecology and Wildlife Biology (HCEWB) and the Advanced Centre for Atmospheric Radar Research (ACARR) of the Cochin University of Science and Technology (CUSAT) in Wayanad has emerged as a model in providing a timely assistance to the district administration and public.

The centre has mapped landslide and mud slip locations in the district with public participation after the massive landslide incidents in 2018 and 2019, Says C.K. Vishnudas, director, Hume Centre.

The mapping exercise continued in 2019 and 2020 and it was found that many such incidences happened outside the sensitive zone marked by the National Centre for Earth Science Studies, Mr. Vishnudas said.

So a new approach was taken for analysis that came out with a new landslide susceptibility map of the Wayanad creating panchayat wise zonation maps. The analysis found though extreme rainfall was the triggering factor of landslides, land use pattern in slopes higher than 25 degrees can also cause it, he said.

As rainfall was the triggering factor, the centre started establishing rain gauges across the district with public participation. As many as 120 rain gauges have been established so far.

“We have been contributing regular data to District Disaster Management Authority, from where the early warning alerts are issued to concerned panchayat on a daily basis, and CUSAT for creating a Wayanad specific rainfall forecasting system,” he said.

The district is divided into 106 grids of 25 sq km area each for the purpose. Along with forecast data, the centre collects actual rainfall data from each grid. This helps to test the efficiency of daily forecast as well as the intensity of precipitation.

The forecast and daily data collection is shared to the participants through a Whatsapp group called ‘Wayanad Weather Forecast’.

“As decentralised weather monitoring system can enhance local resilience system in the context of extreme weather events it needs to be expanded to other vulnerable regions of the State, through multi institutional collaborations,” S Abhilash, Director, ACARR, said.

“Our next goal is to make this rainfall forecasting system into public domain through an open data portal and upgrading the current system to make it more accurate and are experimenting with a one week trend for farmers, who are struggling with high variability and unpredictability of rainfall,” Dr. Abhilash said.