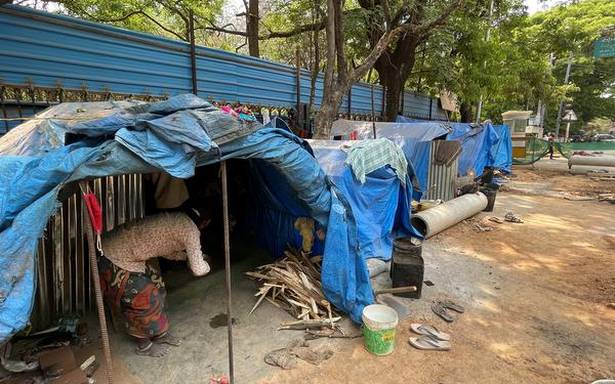 As she works on levelling the pavement and helping her husband who is planting saplings, Sameena (name changed) keeps an eye on her three-year-old son, who is playing by himself nearby. Sameena and her husband Sharief (name changed) are among the 30-odd labourers working on T. Chowdaiah Road.

The labourers, who are mostly from different districts of north Karnataka, live on-site in tents made of blue tarpaulin and tin sheets. There is just one portable toilet for all the labourers and their families.

With soaring day time temperatures, these tents become inhospitable, and the nights are no better. Troubled by mosquitoes and rodents, sleep is elusive.

“We can manage the heat; it’s the rodents and other vermin that are giving us sleepless nights. We have to safeguard our ration from them,” she said.

All these labourers are working on road projects being executed by the Bengaluru Smart City Ltd. (BSCL). Road improvement works have been taken up on around 35 roads, all in the Central Business District, most of them a stone’s throw away from Raj Bhavan and Vidhana Soudha, the power centres of the State. Yet, they continue to live in squalid conditions with no proper ventilation or other facilities.

According to Maithreyi Krishnan from the All India Central Council of Trade Unions (AICCTU), the labourers should be given all facilities as prescribed under various laws, including Building and Other Construction Workers’ Act, 1996, Contract Labour (Regulation and Abolition) Act, 1970, and Inter State Migrant Workmen Act, 1970.

“Ideally, these labourers should be provided minimum wages, equal pay for equal work and accommodation with basic facilities. The onus is on the principal employer, in this case BSCL, and the contractor. Any other arrangement, such as sub-contracts, is deemed illegal,” she said.

The labourers are working on improving civic amenities in the city, especially in the five-km radius around Vidhana Soudha, but are living in poor conditions, she pointed out and said AICCTU was undertaking a survey of the living conditions of these labourers.

More than a year ago, CIVIC Bengaluru, a non-profit organisation, had submitted a memorandum on the poor living conditions of these labourers to the Labour Department. Consequently, the department issued an order, based on the Model Scheme of the Union Ministry of Labour, Supreme Court directives and borrowed heavily from CIVIC’s memorandum, directing the Building and Other Construction Workers’ Board to utilise cess amounting to ₹8,000 crore to provide basic benefits to these workers, pointed out Kathyayini Chamaraj from CIVIC.

However, following the outbreak of the COVID-19 pandemic, the level of implementation is unclear. Ms. Kathyayini added that she had now filed an RTI application seeking information about the same. “We had raised the issue again in March and written to the Chief Minister, Urban Development Department, BSCL and Labour Department. However, there has been no response so far,” she claimed.

Hemanth Kumar from Ashankura Trust that works for the welfare of migrant labourers alleged that many labour laws were being violated. There have been instances of contractors not even paying compensation to workers injured at the work site, he claimed. He said he would take up a survey of these work sites and submit a complaint on the labourers’ living conditions to the Labour Department and BSCL.

BSCL Managing Director P. Rajendra Cholan claimed that he had not received any complaint on the labourers’ living conditions. He, however, admitted that, as the principal employer, BSCL would ensure that contractors provide all amenities to labourers, especially basic accommodation that is well-ventilated.

“We are working towards ensuring all the pending work is completed by May. Around 60% of work is completed so far,” he said and added that in case of any negligence on the part of contractors, BSCL would initiate stringent action against them.