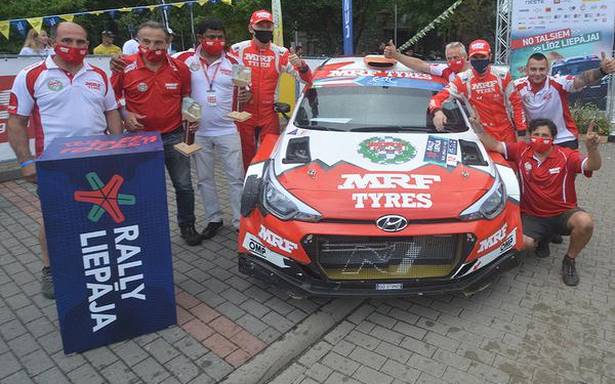 With a second-place finish at the Rally Liepaja, Team MRF Tyres registered its first-ever podium in the European Rally Championship (ERC) on Saturday.

It was a hard-fought finish with Craig Breen and Paul Nagle battling against Europe’s best throughout the day.

The day’s action saw six stages and 90.92km of action in warm and sunny conditions on roads around the Latvian coastal town of Liepaja.

The Team MRF Tyres Hyundai i20 R5 started the day in second place and was involved in a great fight with Nikolay Gryazin and Konstantin Aleksandrov (VW), Efrén Llarena and Sara Fernandez (Skoda) and Alexey Lukyanuk and Dmitriy Eremeev (Citroen). Just 13.4 seconds separated the four cars.

The day started with the 18.42km Neste stage where Breen and Nagle came in third in the stage with a time of 9:18.2, just 3.4 seconds off the lead.

The pace was repeated on the second stage of the day, with Breen/Nagle taking second, just 3.1 seconds off the stage win on the Invest in Liepaja! stage. Third on stage nine, solidified Team MRF Tyres second place going into the final service.

“We had to push for the whole rally. This series is very strong with some of the best drivers competing and we had to fight hard at every stage. Getting our first-ever podium in the ERC is very satisfying for me and Team MRF Tyres,” said Breen.