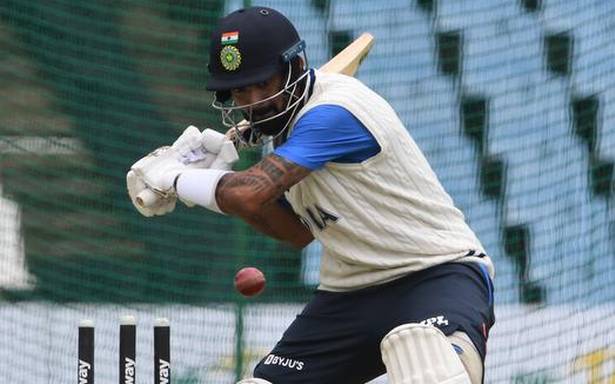 India vice-captain K.L. Rahul on Friday indicated the team would continue with its five-bowler strategy in the first Test against South Africa but agreed the choice between Ajinkya Rahane and Shreyas Iyer for the No. 5 batting slot was a tough one.

Asked if playing four bowlers, which allows an extra batter in the line-up becomes a workload management problem, Rahul replied: “Every team wants to pick up 20 wickets to win a Test. We have used that tactic and it has helped us in every Test match that we have played away,” Rahul said at a virtual media interaction.

“Workload also becomes slightly easier to manage with five bowlers and when you have that kind of quality, we might as well use it,” he said.

Shardul Thakur, because of his superior batting skills holds an advantage over senior pro Ishant Sharma, it could mean that only one among Iyer, Rahane and Hanuma Vihari will get a look-in as Rahul, Mayank Agarwal, Cheteshwar Pujara, Virat Kohli and Rishabh Pant select themselves.

“Rahane has been an important member of the Test team, played very, very crucial knocks in his career,” Rahul waxed eloquent about his senior teammate.

“In the last 15-18 months, he has played some crucial knocks, that partnership with Pujara at Lord’s, was important for us in winning the Test match.

“Shreyas, obviously has taken his chances and got a brilliant hundred (along with a fifty) in Kanpur and he is very exciting. Hanuma has done the same for us, so it’s a tough decision,” he said.

Rahul also agreed that the Supersport Park track was slow to begin with, quicken later only to taper off towards the end of the match.

“It’s been that kind of a pitch, we have had centre wicket practice and we experienced the same things, we tried to prepare accordingly,” he said.

Rahul is the new deputy to Virat Kohli in the absence of an injured Rohit Sharma and for him his primary duty is to give the team a good start and if required provide his skipper with technical inputs.