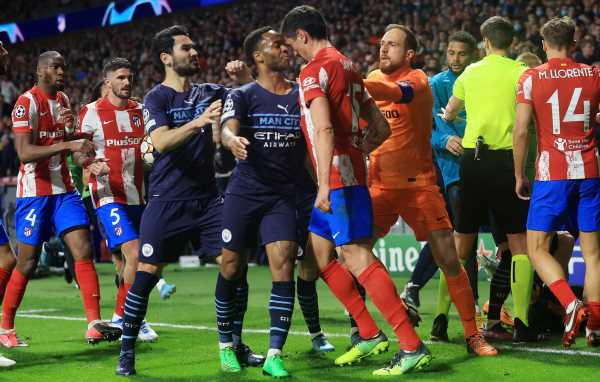 There were scuffles on and off the pitch as Manchester City played out a nerve-wracking goalless draw at Atletico Madrid on Wednesday that secured Pep Guardiola’s team a place in the Champions League semi-finals.

Tempers flared in the closing stages as Atletico desperately tried to level the tie and force extra time following their 1-0 defeat in the first leg in England.

Atletico defender Felipe was sent off after receiving a second yellow card before the teams played out 12 minutes of added time. Scuffles broke out among the players following Felipe’s dismissal for kicking out at Phil Foden and continued after the final whistle as the teams went down the tunnel, with the police having to intervene to restore calm.

TV footage appeared to show Atletico defender Sime Vrsaljko throw a bottle at a Man City player in the tunnel, before the police took charge of the situation.

Atletico players accused Man City of time-wasting in the final minutes, which the English club denied.

“Who were wasting time were their team, getting into absurd fights,” City defender Aymeric Laporte said.

“We already know how they are and they always do the same. It’s always ugly to see these fights, a lot of fuss is made with little… I think it was bad for them because they were in their best moment in the game.” An angry Guardiola refused to answer questions about time-wasting, but City midfielder Rodri admitted that there are times when it is necessary.

“When you are locked behind and when there are five to 10 minutes left, we have to play with other weapons,” Rodri said.

“I am not in favour of doing it throughout the game, but on occasions. What stays in the field stays there. It’s a game with a lot of pressure and I don’t really know what happened to Felipe, but it’s not pleasant.”