ICC World Cup 2019: As invulnerable as he has seemed, he's not beyond flaws and faults, which the razor-sharp Indian bowling could look to probe. 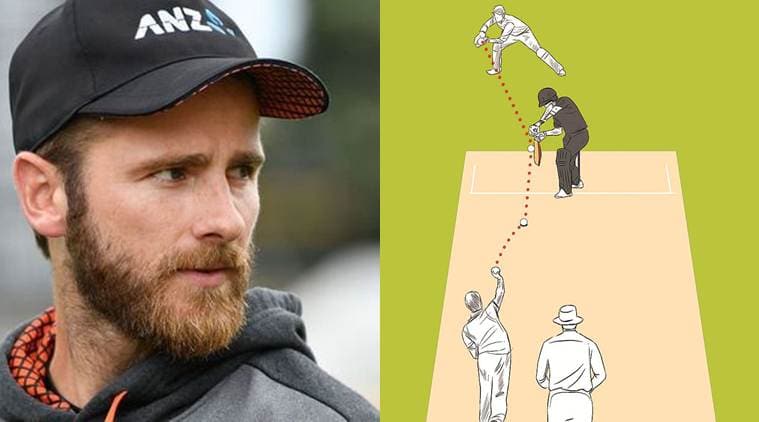 Kane Williamson has accounted for as much as 32 % of runs New Zealand have accumulated in this Cup, so much so that their fortunes have almost solely hinged on his form. His fundamentals schooled in classical tenets, he could be a game-altering force once he entrenches himself at the wicket. But as invulnerable as he has seemed, he’s not beyond flaws and faults, which the razor-sharp Indian bowling could look to probe, analyses SANDIP G

Back of length ball with width: It’s Jasprit Bumrah’s default trajectory. Some balls tend to kick up. Some others skid through. Both could potentially trouble Williamson. The New Zealand skipper has a penchant for dabbing such deliveries with an open face through backward point. While he’s exceptionally clinical with this stroke, a staple in limited-over games, he sometimes tends to play away from the body, especially early in his innings. He shuffles across but his feet remain static, and he ends up stabbing at the ball.

READ | India hold the cards in semifinal against New Zealand

Williamson also has a tendency to cramp himself by the shuffle — denying himself room to play the cut. A bit of away movement could pose further trouble, as his hands go fishing at the ball. Mostly, he gets caught behind or ends up lobbing the ball to backward point. He has also managed to bottom-edge and hack such balls, often when they keep low, onto his stumps.

It’s a ploy India has deployed against Williamson with a fair amount of success in the past. Both Bhuvneshwar Kumar and Mohammed Shami had nailed him while trying to play the aforementioned stroke in the series in New Zealand earlier this year. Bumrah is a deadlier exponent of this method, with his ability to make the ball leap off a length as well as make it scuttle inwards at knee height.

Virat Kohli: I’ll remind Kane Williamson about 2008 U-19 semis when we meet tomorrow

So this line can effectively threaten both edges. But the margin for error is minuscule. Anything marginally fuller or shorter, Williamson gets into supreme positions to summon a range of glorious strokes. Length ball outside off-stump, dipping: Williamson is an exceptional player of spin bowling, but sometimes fails to gauge the dip of the ball, committing too early into the stroke. It’s puzzling because he’s someone who generally has a lot of time to play his shots. In the Pakistan game, he failed to decode Shadab Khan’s dip and ended up lunging at a length ball from the crease. The ball floated invitingly for him to launch a cover-drive. But it stopped, dipped and spun away, inducing a faint edge to the ‘keeper. Alarmingly enough, Shadab isn’t quite masterly with the polished aspects of spin bowling. Kuldeep Yadav clearly is and could hypnotise batsmen with his drift and dip. And he deceived Williamson in a similar fashion in Napier at the start of the year when he made the acclaimed batsman reach out for a ball and miscue it.

Identical was how he consumed him in Mumbai in 2017. So has, even more spectacularly, Yuzvendra Chahal. This was homing in on middle stump and Williamson stepped out to smother the spin, only for the ball to land a few centimetres away from where he anticipated it would. That he has a problem getting to the pitch of the ball was further highlighted by Mehidy Hasan Miraz in the Bangladesh game. Left-arm kryptonite: Until recently, opposition skippers used to pack a left-arm spinner just to nullify Williamson’s threat. Pragyan Ojha has devoured him three times in a row—and five times overall in four Tests. And he has had his struggles against Rangana Herath, Zulfiqur Babar, Sulieman Benn and Yuvraj Singh. Often, they used to encourage him into playing the cut shot, which he does uninhibitedly, before pushing one faster, back-of-length-ish and closer to the stumps. The ball looks cuttable, but is not. These days, he has curbed this impulse, until the delivery is where he wants it, but Ravindra Jadeja, if he plays, wouldn’t mind testing his abstinence levels.

Slower balls, cutters: A few times in this World Cup, Williamson hasn’t exuded utter control in dealing with slower balls, especially the cutter variants, on the drive. Often, he makes late adjustments to avert the danger, like checking the drive, taking the bottom hand off the handle, or opening the bat face, and there have been instances when he has evaded the fielder’s grasp by inches. All of Bumrah, Bhuvneshwar and Hardik Pandya are skilled at disguising their slower ones, besides slipping in an assortment of cutters. Their expertise could be lethal if the surface slows up.