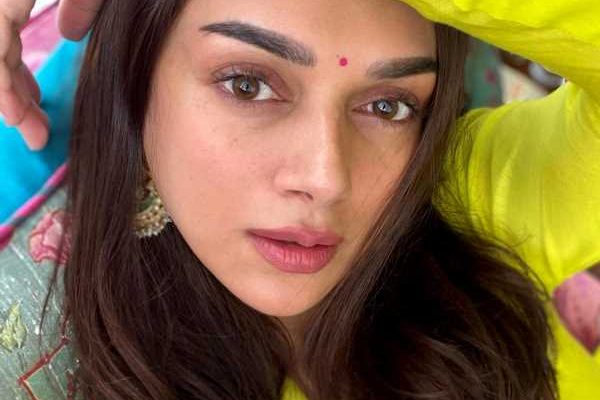 ‘I’m a very positive and optimistic human being.’
‘You put a pile of garbage in front of me and I will find a flower in it.’

She is a conventional Indian beauty, but in her own way, Aditi Rao Hydari has been redefining the stereotypical with her choice of films and characters.

In a heart-to-heart conversation with Rediff.com Senior Contributor Roshmila Bhattacharya, Aditi says, “Strength doesn’t have to be fierce. I believe being vulnerable is my biggest strength as opening your heart to people takes a lot of courage. I laugh, I cry, I am so transparent. I see that as my strength.”

While you were already a singer and dancer, given that the common perception or rather, misconception about the film industry, how did your family react to your decision to enter it?

Cinema is also an art form. It depends on what intention you come in with.

Also, I believe that good or bad people could belong to any profession.

I have always been inspired by good story-telling, creating something timeless on celluloid.

My family knew I wanted to be a Mani Ratnam heroine and I’ve always had the freedom to live out my dreams.

As a girl child, I was never given a booklet specifying this is what I could or could not do. I was never treated any differently because of my gender. 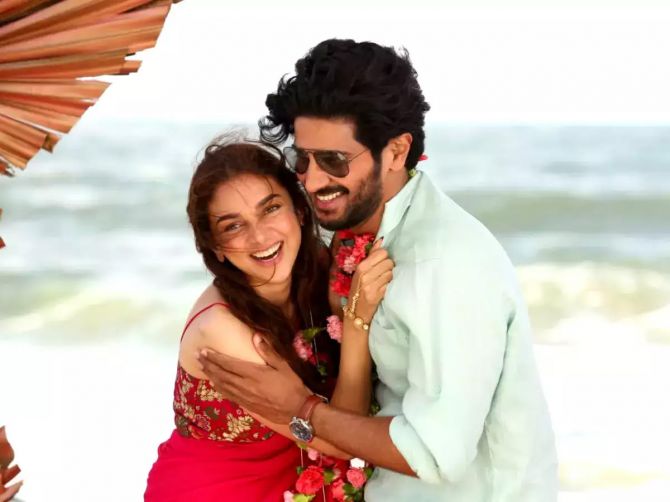 But the film industry has traditionally been a male-dominated space.

Yes, but we tell stories about life, and since you cannot have life without women, you can’t have stories without women.

When people say ‘heroine-oriented’, my antenna goes up because you don’t say ‘hero-oriented’, right?

When you are talking about people, sometimes the protagonist is a man, sometimes it’s a woman.

That balance needs to come into the world of cinema and I think it has.

Today, there are so many different voices, people from different backgrounds, different actors… It’s one step at a time, but change has come in.

Still, there’s no pay parity and women are generally portrayed as glamorous dolls. So, in the initial stages, was it difficult to fit in?

I’m a very positive and optimistic human being. You put a pile of garbage in front of me and I will find a flower in it.

I started in 2010-2011 and by then, things were already changing as is evident from some of my early films like London Paris New York and Yeh Saali Zindagi.

I believe the things you want to do always find you.

When it comes to certain advantages, like the pay scale, well, that’s a fact, and you could either get resentful and angry or decide to work your hardest and not let it affect you on a daily basis.

Yes, I could take decisions that bring about changes in my life and profession in a larger sense, but at the same time, I can’t be fully responsible for bringing about this change.

I know many girls have spoken out about this, some louder than others.

In our own way, we are all making choices that reflect growth, a more expansive view of cinema, even saying ‘no’ at times.

This change has to be shared by our co-stars too, all of us working towards a more democratic set-up which is driven by talent and not gender, surname or anything else. 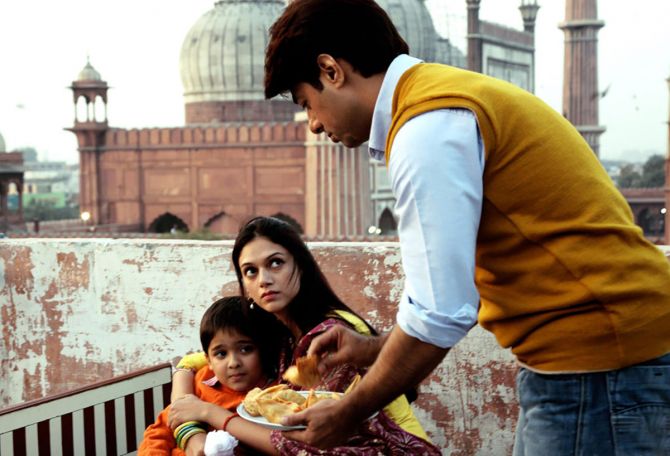 I’m grateful for the opportunities I’ve got.

I’ve worked with some of the best directors and today, in four film industries, people are writing scripts for me.

Even for the just-released Hey Sinamika, Dulquer (Salman) and I were our director, Brinda Master’s first choice.

No actor would have refused to work with her, but she refused to make the film without us.

So I deal with these battles in my own way, maintaining my dignity and self-respect while learning like a child and evolving every day, instead of sitting on a high horse all the time.

As an actress, you have often veered away from the conventional, Hey Sinamika being an example.

A lot of the fun and scope to explore different layers and moods comes from the script and the characterisation.

Hey Sinamika is a modern-day take on love and relationships, expectations and impatience, of living one’s life and being true to who you are and your dreams while giving each other space.

It’s the story of a paleotempestologist, Mouna, who takes care of the bills while Dulquer’s Yaazhan is a happy house husband doing the cooking and the chores.

Managing a house is no menial task. It’s a thankless, 24×7 HR job and I doff my hat to those who run spectacular homes.

At the same time, if someone wants to go out and work, why stop them?

I understand that women are biologically equipped to give birth which endows them with the nurturing quality of a mother, but that is not to say that men are not nurturing too.

Why do roles have to be gender-driven? Why can’t they be chosen depending on one’s interest?

It is all about pursuing your dreams, respecting people for who they are and what they want to do, and finding the right balance. 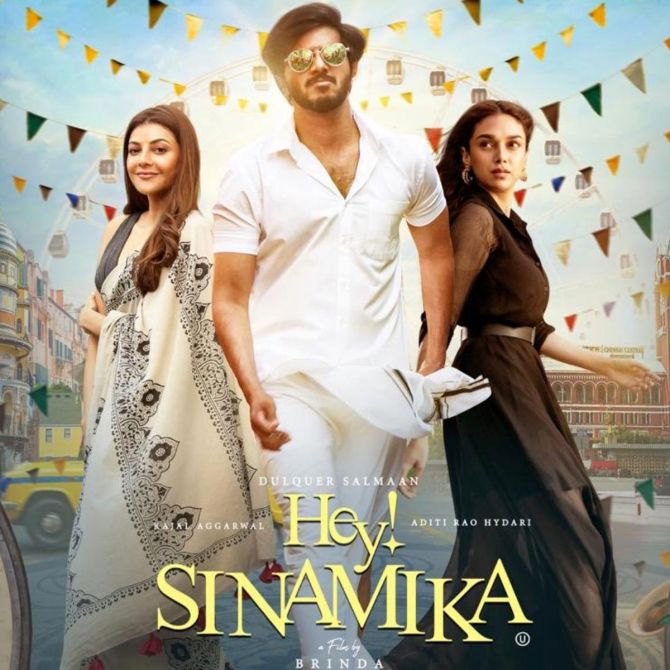 One of the most talked about scenes is of Dulquer wearing Mouna’s dress.

Yes, and it’s nice that while being such a popular mainstream actor, Dulquer didn’t hesitate to do it.

Usually, it’s the boy telling the girl how to dress, but in this case Mouna tells him, ‘What the hell are you wearing? Go change.’

Yaazhan doesn’t think there’s anything wrong with wearing a dress.

He is comfortable with who he is.

What he wants is to stay at home, garden, cook, eat and force feed Mouna which he does all the time, much to her exasperation.

I see Hey Sinamika as a kind of a coming-of-age film.

Usually, such stores are told from the point of view of the boy, who is an irresponsible brat, while the girl always has it together.

In this case, while Mouna knows what she wants and has a routine in place, she is immature, a bit of a brat herself.

A lot is being said in this film, but in a lighter vein because we wanted to reach out to young people grappling with similar problems that are real and can become stifling. We wanted them to watch our film to get another point of view.

The director, Brinda, is a woman, as is the DoP, Preetha Jayaram, and editor Radha Sridhar. How cool was that?

It was cool, but on the set, it did not matter if the director or other HODs was a man or a woman. We were all doing our jobs.

Has there been a role you were uncomfortable playing because the character was so different from you in the way she thought and acted?

Yes, there have been instances where I would find myself asking, ‘Why is she doing this? Why would she say something like this?’

Not very often, but I have.

But since it’s not my story and the girl doesn’t come from the same background, it is my job to breathe life into the vision of the writer and director, irrespective of whether I agree or not. 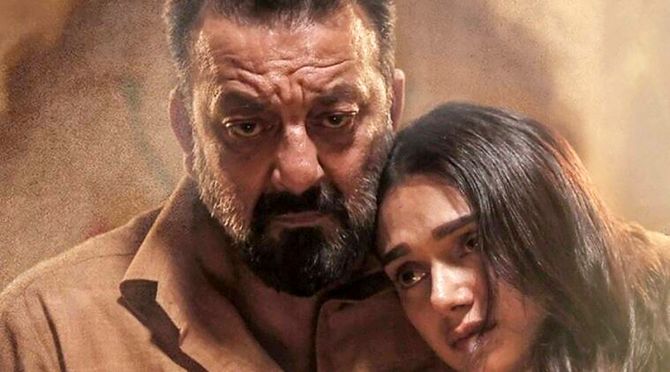 It happened during Bhoomi, in which Sanjay Dutt plays my father and something bad happens to me.

There was a particular dialogue which went, ‘Society won’t change, so we should change.’

I spoke to the writer and told him that as a woman, I didn’t think I should say the line.

We have always been asked to change for others, but at a time like this, women should be allowed to be who they are.

It is important that they say, ‘This is who we are and we will stand by who we are. Society may not always understand, but we can fight that instead of changing ourselves.’

Having said this, I reiterate that since I am telling someone else’s story, I may not always be that woman, but I can inhabit that world.

Many of your characters — be it Shanti in Yeh Saali Zindagi or Dr Leela Abraham in the Tamil war film Kaatru Veliyidai, Mehrunisa in Padmavaat or Maha in Maha Samudram — have been strong women who charted their own paths.

It’s important for me to say here that quite often people look at strong women in a stereotypical way.

Strength doesn’t have to be fierce.

I believe being vulnerable is my biggest strength as opening your heart to people takes a lot of courage.

Many of my friends tell me I am like a five year old.

I laugh, I cry, I am so transparent.

I see that as my strength. 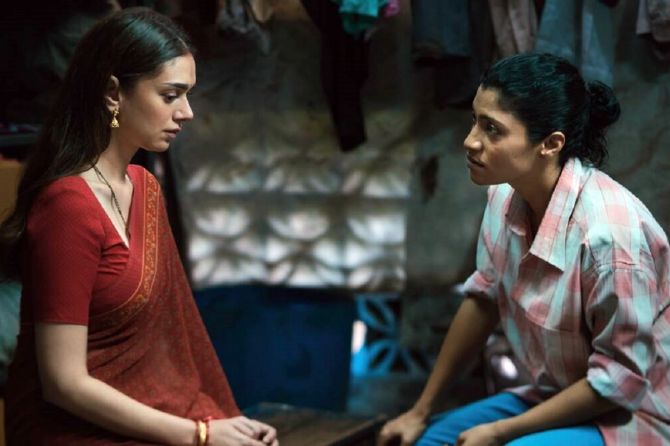 Is OTT changing cinema and the portrayal of women? For instance, Neeraj Ghaywan’s short film Geelli Pucchi in the Netflix anthology Ajeeb Daastaans spoke about caste, patriarchy, privilege and sexuality in a realistic, easy-to-empathize manner.

Geeli Pucchi is absolutely brilliant in its writing and characterisation.

I was amazed at the layers and layers; so much information given but done so gently, so subtly and yet so clearly.

Both the characters are incredible. Koko’s (Konkona Sen Sharma) Bharti is the hero in this story while my Priya is Neeraj’s attempt to subvert the idea of a manic pixie dream girl.

To answer your question, while I am a fan of the big screen and am loving Hey Sinamika‘s huge success in the theatres, as an actor, I am also happy that OTT has given writers and directors the freedom to explore stories about life in all its complexities.

I am happy that actors like us are getting to inhabit worlds we don’t know much about.

That’s the magic of cinema and I hope we can sit in your hearts, make you believe in our world and come home with you.