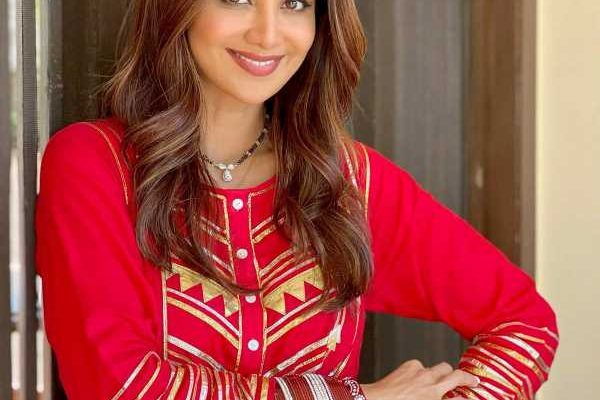 ‘In our days, we used to write letters and then there used to be phone calls.’
‘We would give blank calls.’
‘Now, just listen to the songs.’
‘Romance has changed.’

Shilpa Shetty has never been too far away from the public eye, but her acting career did take a backseat after her wedding to Raj Kundra in 2009.

The actress, who had been doing television and brand endorsements all these years, makes her big screen acting comeback in Sabbir Khan’s Nikamma, which features her as a woman with superpowers.

Did her parents ever call her a ‘nikamma‘? “When my mom saw my prelims reports,” recalls Shilpa.

“I scored some 48 percent, and it was quite disgraceful,” the movie star, who celebrated her 47th birthday on June 8, tells Rediff.com Contributor Mohnish Singh.

Where do you get your sense of humour from?

An interesting question! Nobody has asked me this before.

Well, my late father had a great sense of humour.

He used to be the life of every party, every function.

Even in the most difficult circumstances, he used to laugh about everything and make people laugh.

Later, I realised that that’s always a great place to be in — to be a person who always makes other people laugh.

So, I think, that trait comes from my dad.

Before anybody else makes fun of me, I say everything that I have to say.

That’s what keeps me sane. You recently said Nikamma was set to be your comeback film, but Hungama 2 happened to release first.

Yes, it should have been my first release because that’s how it was intended to be.

But I believe God always has a better plan.

I am happy that people are going to see Nikamma as my first theatrical film (in 14 years).

This film is the reason I said yes to coming back to the movies and you will see why when you see the film, irrespective of the fate of the movie — because sometimes the biggest films with the biggest actors are not doing well in this weird phase. We have kind of lost perspective on movie-making and cinema.

Having said that, the response that we got from the trailer is amazing.

You are pulling out all the stops to promote the film, especially on children’s reality shows.

I have gone to around five reality shows to promote the film.

I don’t even remember what I did on which show.

I just go there and enjoy being there with kids.

I normally do my own shows, so visiting other shows for promotions is a new experience for me.

In fact, this entire madness of promoting movies is new for me. This is the most challenging part of an actor’s life.

When you are making a film, you know you are playing a certain part. But going beyond that and talking about the same film a hundred times in different ways is a very tedious process.

I enjoy being around children.

I enjoy being around talent.

You get to learn so much from them.

I am very blessed to get paid to do something that I love doing (laughs). What side of an actor did you explore while working on this film?

I can very safely say that this is a kind of role no heroine has ever played before.

I am talking about the facets this character Avani has.

I think I have made a huge statement by saying that no heroine has ever played a character like this. But this character really has numerous nuances.

I have various avatars in the film.

It is one of the most wholesome and amazing processes for me as an actor.

Even content-wise, it is a nice, happy, clean film.

There is this angle of bhabhi-devar, something which I feel has not been explored much in Indian cinema, other than in Sooraj Barjatyaji‘s movies.

Did you feel at any point in your career that you are a ‘nikammi‘?

Not in my career, but I am quite a nikammi when I am at home, and when it comes to doing work.

I will be like, ‘Please, pass it on to me. Keep it here and there.’

My sister always tells me, ‘You are such a nikammi.’

Even if I have to order something online, I’ll ask her to do it for me.

Did your parents ever call you nikammi?

When my mom saw my prelims reports.

I scored some 48 percent, and it was quite disgraceful.

That happened because I was concentrating a lot on extra-curriculars.

I was a volleyball player. I was selected up to the Bombay zone, and I was going to be selected for the state level.

But when my mom saw my reports, she cried and said, ‘You are going to be absolutely useless, just playing games…’

For me, my aim in life at that point was to become a volleyball coach.

But when I realised she was very upset with my score, I studied for 10 days and I got 73 percent. So I was an above-average student. In previous interviews, you have said that you have been very choosy because you believe you are a massy heroine. Now, you are doing a show, Indian Police Force. What has changed?

But that is also very massy.

It is by Rohit Shetty. What can get massier than that?

If I had to do a Web series, it could have not been a bigger launch for me.

I feel I have always been a massy heroine. At the same time, I also believe that I am here to entertain.

So if there is some kind of content that I feel people would like to watch me in or maybe some director I want to work with, I will do it.

I just go with my gut instinct.

So, Priyan (Priyadarshan) sir was someone I really wanted to work with.

That was not an ideal comeback for me, but I could never say no to Ratanji (Jain, producer).

I come from an old school of thought.

With due respect, I loved being part of Hungama 2 because I have a lot of respect for Priyan sir. He is an absolute maverick. What difference did you feel working back then and now with new talent?

I think the new-age actors are different from who we were.

The acting style has changed.

The way we emote has changed.

In our days, we used to write letters and then there used to be phone calls. We would give blank calls.

Now, just listen to the songs — 4 Vodka and Hookah Bar.

Have you ever given blank calls?

Yes. I have also received so many blank calls (roars with laughter).

Next year, you will complete three decades in showbiz. Is there anything that is left unaccomplished?

Of course. If I think I have accomplished it all, this would be the end of it.

The other day, I watched Nikamma because I am going out of the country for a month.

Before the movie began, I kept gulping.

I was parched because I was going to see myself on the big screen after 14 years.

Ironically, I was still working in those 14 years.

I am working more now than I have ever in my life.

I hope I have done justice to Avani.

I hope I am not going to let down my audience.

When I was finished watching the film, I was like, ‘Ab jo ho so ho. Maine achcha kaam kiya hai.’ You are playing a superwoman in the film. Is there any superpower you wish you had?

I am not playing a ‘superwoman’.

I am playing a woman, who has great powers. Let me put it like that.

She is super se upar in the movie.

I felt Avani was a lot like me in a lot of ways.

What was the hardest part of playing Avani?

Avani does not smile. That was the most difficult part for me.

When I am even looking at someone, I have a smile on my face.

For me, to control and contain that was the hardest part. How was your first day on the sets of Nikamma? You were returning to a film set after 14 years.

I felt like that because I was shooting with Abhimanyu (Dassani) and I had watched him in Mard Ko Dard Nahi Hotaand thought he was brilliant in it.

I was like, ‘Oh my God! He just seems like a newcomer, but he actually is not. He is very experienced.’

I was really nervous.

I was doing TV and brands all these years where I was Shilpa Shetty.

There you can do anything that you want. Who is going to say to you that you are doing it wrong?

But here, Avani was a character and you play it to the best of your ability and bring it to life.

To put life into a character that is there on paper is the most thrilling thing for an actor.

I was really very nervous, but thankfully Sabbir is wonderful to work with. He has given such amazing platforms to Tiger (Shroff) and Kriti (Sanon).

I think I made the best decision to start my next innings with this film.