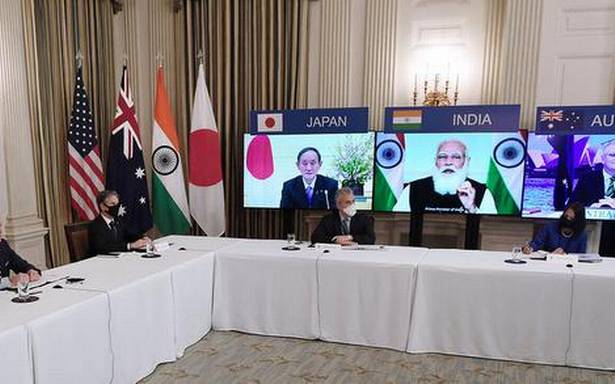 ‘A closed, exclusive clique targeting other countries runs counter to the trend of the times’

China on Friday repeated its increasingly frequent denunciations of the India, U.S., Australia and Japan Quad grouping ahead of the four countries’ first in-person leaders summit in Washington, saying the group would “find no support”.

“China always believes that any regional cooperation mechanism should not target or harm the interests of a third party. A closed, exclusive clique targeting other countries runs counter to the trend of the times and the aspirations of regional countries.

Also Read: Quad summit and main issues on its agenda

It will find no support and is doomed to fail,” Foreign Ministry spokesperson Zhao Lijian said in Beijing, calling on “relevant countries” to “view China’s development in a correct light and do more to promote solidarity and cooperation among countries in the region.”

China’s Ambassador to India, Sun Weidong, also took aim at the Quad in remarks made at a virtual Track II dialogue held on Thursday, and published on Friday on the website of the Chinese Embassy in New Delhi.

“At present, some countries, with their ideological bias and Cold War mentality, vigorously seek closed and exclusive ‘small cliques’ with the aim of containing a third party, stoking bloc confrontation and geopolitical games,” Mr. Sun said.

In remarks apparently aimed to serve as a warning to India on its increasingly close ties with the U.S., Mr. Sun added, "Once getting on someone else’s ship, one is no longer able to have the steer in control.” “Twenty years ago, when the U.S. started the Afghan war, many countries boarded its chariot. Twenty years later, what benefits have these countries gained? We should uphold true strategic autonomy, not only in words, but more importantly, in deeds,” he said, adding that “both sides should remove disruptions to mutual trust, refrain from interference in each other’s internal affairs or engagement in any ‘alliance’ or ‘quasi alliance’ targeting the other, and avoid being alienated by third party.”