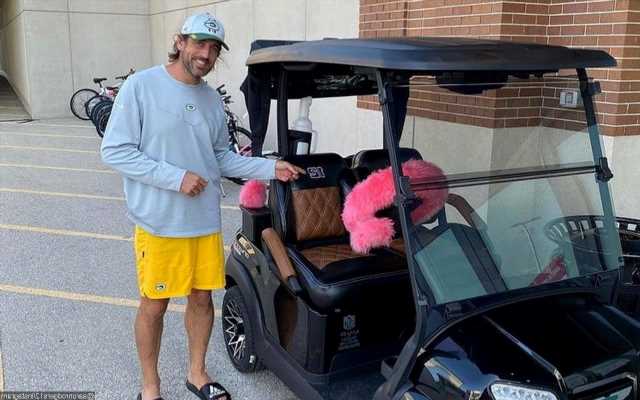 The Green Bay Packers quarterback insists that he ‘had never heard of COVID toe before’ when putting the online chatter to rest during an online press conference.

AceShowbiz –Aaron Rodgers has put “COVID toe” rumors to rest. The Green Bay Packers quarterback showed off his barefoot to the camera to prove that the coronavirus has no side effect on his foot although he previously mentioned that one of the lingering effects was “COVID toe.”

During an online press conference on Wednesday, November 24, the 37-year-old athlete addressed the online chatter. While displaying his feet for the camera, he said, “I’m glad you asked just so I could show you the lesions on my foot here, so if I have enough room on this camera, let me see if I can.”

“Oh, oh there’s no lesions whatsoever. Oh, what a surprise. No, that’s actually called disinformation when you perpetuate false information about an individual,” Aaron further stressed. He then noted that he has “a fractured toe.”

Aaron went on to say that he did “get a kick out of reading that article” that took his “COVID toe” line as truth. He continued, “That was very, very interesting, but no I had never heard of COVID toe before. Pat made a joke about it on the show, and I mentioned yesterday that it’s worse than a turf toe and it must be a bone issue.”

Aaron reportedly fractured his toe after his 10-day quarantine, as he prepared for a Packers game against the Seahawks on November 14. The online chatter started after Aaron shared that he “didn’t have any lingering effects, other than COVID toe” when he made an appearance on “The Pat McAfee Show” on November 23.

Aaron has faced scrutiny after confirming he was unvaccinated against COVID-19, despite previously saying he was “immunized.” After testing positive for the virus, the football player said he “didn’t lie in the initial press conference” because “it was the truth.”

“Had there been a follow-up to my statement that I had been immunized, I would have responded with this. I would have said, ‘Look, I’m not some sort of anti-vax, flat-earther,’ ” Shailene Woodley‘s fiance defended himself in the November 5 episode of “Pat McAfee Show”. He added, “I am somebody who is a critical thinker. If you guys know me, I march to the beat of my own drum. I believe strongly in bodily autonomy and the ability to make choices for your body.’ “

“I am not a COVID-denier or any like that,” Aaron stressed. “I just wanted to make the best choice for my body.” He also shared that he has been tested daily per NFL protocol and that he’s “in the crosshairs of the woke mob right now.”