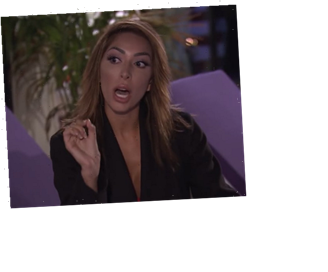 So, you know how Farrah Abraham has unhinged political opinions that are not rooted in reality?

She apparently doesn’t understand the electoral process, which is no surprise to anyone whatsoever.

In her own, incoherent way, Farrah has revealed that she thinks that Congress ignored the election resuls somehow by certifying them.

We know this from her message “celebrating” Black History Month … and also Self-Love Month. Oh, Farrah.

“Always growing up I enjoyed of hearing, reading, watching & learning about our historical African American injustices,” she claimed.

As is so often the case when Farrah attempts to write down her thoughts, the message became rapidly less coherent.

“I still to this day notice the acts of kindness, love, togetherness, inclusion, equality limits intimidation, misunderstanding, stops abuse, breaking laws, and ends segregation and injustices of all sorts,” she wrote.

“#HISTORY101 @netflix is a great reminder to our kids today that even though #America claims to be democratic,” Farrah noted, explaining why she’s posting this — it’s a Netflix promo.

Farrah incorrectly explained both democracy and communism: “(peoples voices are prioritized over “state” as communism is “state” lead only).”

She continued: “America claims to give more rights then anyone nation and other nations do not recognize such segregation or injustice.”

“Note when I saw our congress over rule all of our voices and choose to not change history by only going with ‘state’ or college votes,” she said, leaving us to wonder what on earth is going on in her brain.

Farrah expressed: “my heart broke for all who spent their day voting, who believed in change, believed in are history finally to stop repeating injustices.”

“I hope one day people stop acting out of Hate, Spite, & Immaturity and realize it’s not a highest Ideal to deliver on real democracy, voices being truly an equal,” she rambled without meaning.

“In our history presidents have tried to remove college electoral votes so that state does not over ride the publics votes,” Farrah continued to incoherently rant.

“To this day 2021 it failed again on national television, news, and history,” she said, inaccurate on every conceivable level.

“I hope one day we all stop and think what allowing corruption in votes does, and allowing state to over rule your votes does,” Farrah’s confused blabbering expressed.

“It’s not just one type of people it effects are world from ever truly living in real Democracy- freedom,” Farrah declared.

“Systemically I can’t blame more groups segregating with their own schools, careers, networks,” she wrote alarmingly.

Farrah then added: “The 2 smallest things in our system every 4 years needs change so #blacklivesmatter truly and are heard with equality, so racists can no longer corrupt with hate & spite.”

“So mental illness and depression is cared for from the abuse, injustices & [our] education systems don’t only show you one side of history but all sides,” Farrah chattered.

She wrote: “Plant a seed of love, hope, & focus to stop going in circles and hitting your head on a wall.”

Farrah’s nonsense concluded with: “Open your hearts & minds no matter how you type cast yourself”

Perhaps the funniest part of this alarmingly unhinged rant was that it included a comment from “Sophia,” one that fans noted was transparently written by Farrah herself.

Sophia’s alleged comment praised both her mother and Netflix … there’s nothing that kids love more than a likely paid promotion.

While no amount of education will stop Farrah from being a horrible person, many of us would pay cash money to see someone sit down and explain to her how wrong all of that drivel was.

Farrah Abraham Is Desperate For Cash, Will Do ANYTHING to Avoid Getting a Real JobStart Gallery