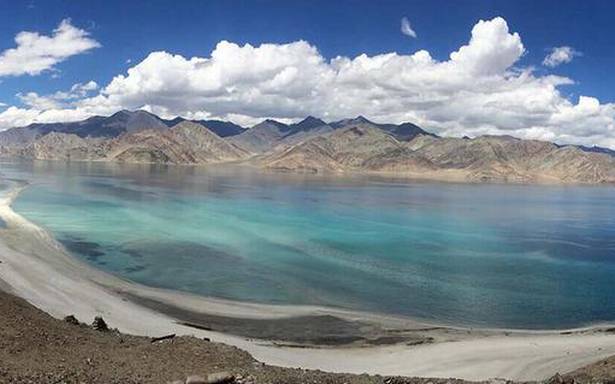 What is the current situation in Eastern Ladakh? How has India responded to the new developments?

The story so far: China is building a bridge across the Pangong Tso within its territory connecting the North and South Banks which will significantly reduce the time for moving troops and equipment between the two sides. This is part of the overall infrastructure build up by China on its side of the Line of Actual Control (LAC) to address deficiencies it noticed since the standoff began in May 2020.

What is the status on the ground in Eastern Ladakh?

The two countries are working out details for the 14th round of Corps Commander talks to take forward the disengagement that has stalled after two phases of disengagement. The 13th round of Corps Commander talks remained inconclusive with the two sides releasing sharp statements on the outcome. At the same time, the two Armies had prepared to keep over 1 lakh soldiers on both sides deployed through the extreme winter in the high altitude region.

Since May 2020, the two sides have been holding regular military to military talks on the ground and also diplomatic level talks in addition to the 13 rounds of Corps Commander level talks to resolve the standoff. The two sides have so far undertaken two phases of disengagement, from both banks of Pangong Tso last February and from Gogra in August in addition to Galwan after the violent clash. Other friction areas yet to be resolved are Hot Springs, Demchok and Depsang.

The two sides had also agreed on a moratorium on patrolling in the disengaged areas and set up buffer zones until a resumption is discussed by both sides through diplomatic and military talks. India has insisted on comprehensive de-escalation of the situation in Eastern Ladakh which includes disengagement from all friction points, de-escalation and working out of new protocols.

What is the importance of the bridge over Pangong Tso?

The bridge over Pangong Tso is located around 25 kms ahead of the LAC in Chinese territory and will significantly reduce the time for movement between People’s Liberation Army (PLA) garrison at Kurnak fort on the North Bank and the Modlo garrison on the South Bank, a distance of around 200 kms.

The initial tensions as the standoff began in May 2020 were on the North Bank of Pangong Tso with PLA troops moving upto Finger 4 and building permanent structures. However, tensions had flared up on the South Bank in August 2020. The Indian Army gained tactical advantage over the PLA on the south bank in end August by occupying several peaks lying vacant since 1962 gaining a dominating view of the Spanggur gap and Moldo area. During this, the two sides had also deployed tanks at heights of over 15,000 feet and shots were fired in the air on the LAC for the first time in decades.

This has prompted China to build deep alternate roads behind the friction points away from the line of sight, officials said. There has been massive construction of accommodation for housing of troops closer to the LAC and also road infrastructure for movement of troops and mechanised forces, officials say.

Earlier, PLA had to take a round about between the two sides of the Pangong lake which takes around 12 hours but the new bridge, around 500m long, would cut down the time to 3-4 hours. Construction has been ongoing for few months now, officials said.

India holds one third of the 135 km long boomerang shaped lake located at an altitude of over 14,000 feet.

How is India responding to developments on the ground?

The bridge is well within Chinese territory, officials say while stating the implications of this new bridge will have to be factored in the Indian Army’s operational planning for the future.

On its part, over the last few years India has been focusing on infrastructure development in forward areas and improving connectivity to the forward areas. Large scale construction of roads, bridges and tunnels is underway all along the LAC.

Ahead of the winter, the Army had completed advanced winter stocking for the troops in forward areas, including rations, specialised fuel and ammunition among others as well as repair and upgrade of habitat and infrastructure.

While the process of disengagement and de-escalation stretches on, the two armies are geared to remain in the high altitude areas.