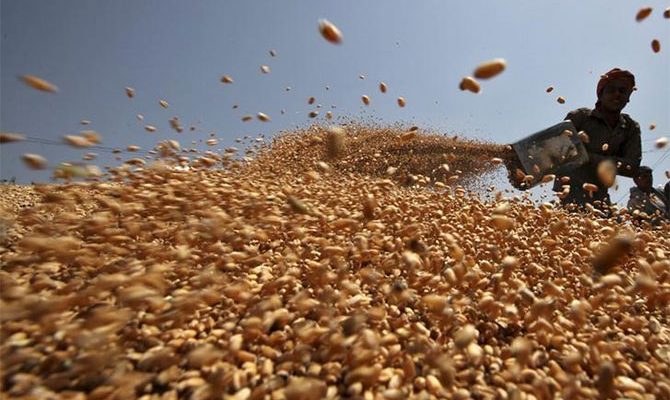 ‘We cannot afford to be complacent about our food security needs.’

After banning wheat exports in May 2022, the Narendra Damodardas Modi government has now banned the exports of wheat flour, maida and semolina.

When the Modi government banned the exports of wheat, there was criticism by economists who felt that it was time for India to cash in on the wheat shortage hitting the world due to the Russia-Ukraine war.

In their opinion, it was a golden opportunity for India to strengthen its rupee by exporting wheat which the government had failed to do.

Ironically, the government had sent representatives to nine countries to explore the possibility of exporting wheat, but backtracked at the last moment fearing wheat shortage within the country.

It is against this background that the latest ban on exporting wheat flour, maida and semolina needs to be seen.

“As long as the Russia-Ukraine war goes on, we must make every effort to keep domestic prices of wheat and wheat atta under control,” Devinder Sharma — agricultural scientist, food policy analyst, activist and commentator on agricultural issues and food policy — tells Syed Firdaus Ashraf/Rediff.com.

The answer is obvious. The retail price of wheat flour and maida are increasing in the domestic market and therefore the government has moved in and restricted its export.

We saw a 200 percent increase in the exports of wheat flour (between the months of April and July 2022). The government wants to keep the prices of wheat flour affordable in the market for the people of India and therefore they have banned the exports.

Was the government caught off guard as people were converting wheat into flour and exporting, which the government did not anticipate when they banned wheat exports?

Soon after India put wheat exports on the restricted list in the month of May allowing only for government-to-government requests, domestic prices of wheat atta begun to rise. Subsequently, the demand from abroad for atta also saw a steep hike. This prompted the government to regulate export of wheat atta, maida etc.

How long will the situation continue wherein the prices of wheat and wheat flour are increasing?

Well, we can only keep our fingers crossed. As long as the Russia-Ukraine war goes on and at this moment nobody knows how long this war will continue, we must make every effort to keep domestic prices of wheat and wheat atta under control.

More importantly, India cannot afford to compromise on its food security. This message should be loud and clear.

After the Russia-Ukraine war broke out in March 2022, there was too much of excitement in India because we had surplus of wheat stocks and, therefore, we felt we must export to other countries.

I recall one Indian company even going to the extent of saying that given the availability of surplus wheat stocks India can even export as much as 21 million tonnes of wheat.

At that time I had warned that it was not the right approach and unbridled exports of wheat should stop.

I am glad the government listened to it and put a ban on wheat exports.

Today, there is shortage of wheat across the globe. The countries which were dependent on Russia and Ukraine to meet their wheat demand are now importing wheat from other countries and are stocking as much as they can from whatever sources it is possible.

Luckily, the government took the decision of banning exports of wheat. Had they not done that, imagine, we too could have been standing with a begging bowl and asking for wheat imports from other countries!

I think it is very important for our country not to allow unbridled export of staple food like wheat and paddy (rice).

We must ensure that we have adequate food stock for not only one year, but also for two to three years.

Why has wheat production declined in India this year?

We had the hottest season after 122 years in March 2022. The heat wave hit the standing crop at the time of maturity. At the same time, the trade purchased a lot of quantity of wheat directly from farmers thereby resulting in a significant fall in procurement.

Given that we are in times of a climate emergency we should be careful about the impact on staple foods production and availability.

Global climate is changing and how can our industry, trade and policymakers not understand what it can mean to our food security?

How can policy makers and experts seek export opportunities when globally the effort is to stack as much as possible knowing the climate can go topsy-turvy any time?

One economist told me that India missed the bus on wheat exports and had we done that the Indian rupee would have appreciated, and since we did not do that now it is hovering at around Rs 80 plus.

This is a faulty argument.

Had we not banned the exports of wheat then, we would have already been standing with a begging bowl by now to import wheat. Would that have made the rupee stronger against the dollar?

Remember that Indian company which said it could export 21 million tonnes of wheat to the international market. Two months later, the same company was shrieking about the rise in domestic wheat prices.

They are not even consistent in their statements, and perhaps do not even realise the implications of what they are saying.

The Modi government took the right decision by not listening to these economists as well as trading companies on wheat exports.

Imagine what would have happened to our dollar position if we had to import wheat from other countries today. The price of wheat in the international market has already doubled.

But why are the prices of wheat flour (atta) rising? The average retail price of wheat flour has increased by over 17 percent to Rs 35.17 per kg as against Rs 30.04 a little while ago. Will this go on rising in the near future?

It all depends on the availability of wheat flour in the country.

If we have adequate stocks in our country, then the prices will not increase.

Today, we have less stocks and therefore we have banned the exports of wheat first and then we banned export of wheat flour too.

We also started giving rice instead of wheat to our ration card holders because we are aware of the tight situation on the ground.

The government knows that the wheat stocks are at a worrisome level for the next year and therefore they are taking these measures like banning exports.

The government has taken the right steps.

We are seeing shortages of food in countries like Italy. You had tweeted about this too.

When there is such a huge line because of food shortage in countries like Italy, then just imagine what would be the condition in India if we had exported our surplus wheat.

Any shortfall arising from climatic aberrations and natural disasters could add to the crisis.

Before they banned the export of wheat the government had wanted to sent send their representatives to nine countries, a move which I am glad was shelved. Luckily, the government backtracked.

I have been asking for a ban on unchecked exports of wheat out of India. We cannot afford to be complacent about our own food security needs.