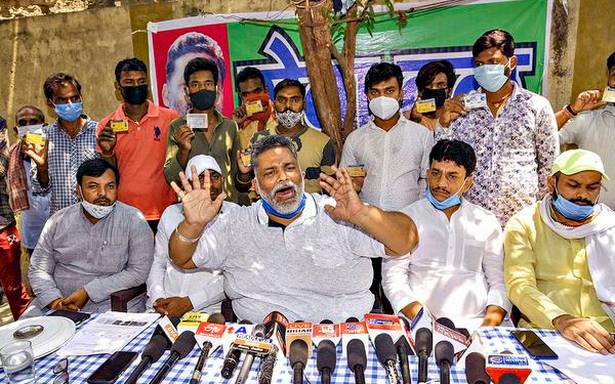 Former MP from Madhepura and president of the Jan Adhikar Party (JAP) Rajesh Ranajn alias Pappu Yadav got bail on Monday in a 32-year-old kidnapping case. Mr. Yadav was languishing in jail in the case since May 11, 2021.

Additional District Judge (3) of Madhepura civil court Nishikant Thakur granted bail to Mr. Yadav for lack of evidence in the kidnapping case registered against him in 1989 at the Murliganj police station in Madhepura district. Two persons Uma Yadav and Ram Kumar Yadav were allegedly kidnapped but later they struck compromise in the case.

On May 11, 2021 the Madhepura police arrested Mr. Yadav in the case from Patna and sent him to the Birpur jail in Supaul. Mr. Yadav was later shifted to the Darbhanga Medical College and Hospital (DMCH) over poor health.

When the former Madhepura MP was arrested he was actively involved in providing help to COVID-19 victims in the State by making sudden visits to government hospitals to meet patients and exposing the poor conditions there. He also raised issue of a fleet of ambulances bought under the MP Local Area Development Fund of BJP MP from Saran, Rajiv Pratap Rudy, which were parked idle in the district during COVID-19 when patients needed them most.

Soon after he was granted bail, Mr. Yadav tweeted, “justice has been done, and conspiracy gets exposed. With the blessings of people I got bail today which proved that I was falsely implicated. Respect to judiciary. I’ll not stopped, neither bow down or tired but will keep fighting. From today I’ll again march ahead on the path of struggle [sic]”.

Meanwhile, the buzz in political circles is that Mr. Yadav’s party might contest in two seats in the coming bypolls in Bihar — Tarapur and Kusheshwarsthan. The by-election is scheduled to be held on October 30 and the results will be announced on November 2.