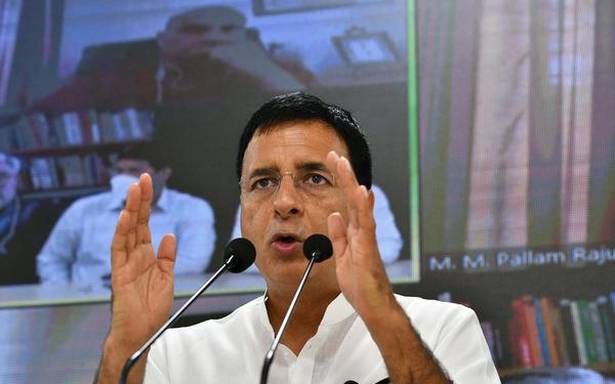 The Congress on Friday demanded that a commission of two sitting judges should be set up to ensure that farmers killed in the Lakhimpur Kheri violence get justice within 30 days. The party reiterated its demand for the dismissal of the Minister of State for Home Ajay Mishra, and the arrest of his son Ashish Mishra, who has been named as one of the main accused in the Lakhimpur Kheri violence.

Citing the Supreme Court’s observations of Friday, in which the apex court expressed “dissatisfaction” over the progress of the investigation in the Lakhimpur incident, Congress’ chief spokesperson Randeep Surjewala said, “It has become clear that the Narendra Modi and Yogi Adityanath governments are standing with criminals.”

“We have only one demand that Ajay Kumar Mishra Teni is dismissed immediately without any delay and all accused are arrested. Since the top court has expressed doubt over the police, CBI (Central Bureau of Investigation) and the administration, we want that a commission of two sitting judges be set up, under whose supervision an SIT (Special Investigation Team) should be formed and the guilty be punished within 30 days,” Mr. Surjewala said.

He also demanded the constitution of a special bench to hear the pending murder case against Ajay Mishra Teni and decide on it on its next date of hearing on October 20. Mr. Teni was accused in the murder of one Prabhat Gupta, a worker of the Samajwadi Party, and the verdict of the revision petition filed in the Allahabad High Court is pending for three-and-half years.

Mr. Surjewala claimed that it was a “record of sorts” that a verdict in a murder case was reserved for such a long time.

“Does this not prove that the Modi and Yogi governments are standing with criminals who tie the Constitution in bonds and those who trample upon the law?” he asked.

Former Union Minister Jairam Ramesh tweeted, “Modi Sarkar doesn’t care, at all. If Mr. Ajay Mishra, the MoS HOME can resume work as usual while the police is hunting for his son, there’s no sanctity to law. Anything is possible. Sabka Saath, Sabko Dhoka!”

His Rajya Sabha colleague, Kapil Sibal, also took to Twitter to target the Prime Minister, asking: “Lakhimpur Kheri Horror Modi ji Why are you silent ? We need just one word of sympathy from you That should not be difficult ! Had you been in opposition how would you have reacted ? Please tell us.”