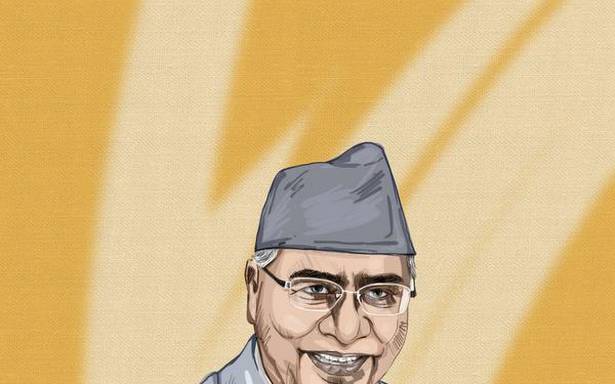 Ironically after the thumping victory of the K.P. Oli-led Nepal Communist Party — formed with the merger of Mr. Oli’s Communist Party of Nepal (Unified Marxist-Leninist) and the Pushpa Kumar Dahal-led Communist Party of Nepal (Maoist-Centre) — in the 2018 elections, Mr. Deuba and his Nepali Congress had been reduced into a smaller opposition force. But following the power struggle between Mr. Oli and his detractors within the NCP and later its demerged constituents, the UML and the Maoists, Mr. Deuba emerged as the consensus candidate of the opposition in a dramatic reversal of fortunes.

Mr. Oli’s attempts to dissolve Parliament and call for fresh elections and to browbeat his way to retain power came to naught after the Supreme Court reversed his decisions (endorsed by the President Bidhya Devi Bhandari ) twice in six months. The apex court then went on to rule that Mr. Deuba should be made the PM on account of the support he had across parties — 149 members in the 275-member Parliament.

The members included the rebels within the UML led by Madhav Kumar Nepal and Jhalanath Khanal, besides Mr. Dahal from the Maoists and Baburam Bhattarai of the Janata Samajwadi Party (JSP). All four of them had been Prime Ministers in the past and had been engaged in power struggles.

That they chose to support Mr. Deuba was a consequence of their mutual animus towards the increasingly authoritarian Mr. Oli to some extent, but was also an endorsement of Mr. Deuba’s ability to both consolidate support within the Nepali Congress (NC) and to reach out to different players in the fractious polity.

Mr. Deuba became PM for the first time in September 1995 and remained in that office till March 1997. His fourth stint at the top job came in 2017 when he entered into a power sharing agreement with Pushpa Kamal Dahal ‘Prachanda’ . Each of the past stints were borne out of political complexities and Mr. Deuba, despite having to deal with the powerful Koiralas within the Nepali Congress, was able to carve his own political space and successfully negotiated for the top job with political allies — both monarchy and the Maoists in different periods. An active campaigner during the 1990 Jan Andolan that paved the way for constitutional monarchy after then King Birendra dissolved the Panchayat system and instituted parliamentary democracy, Mr. Deuba’s first tenure as PM also marked the beginning of Maoist insurgency in the country, which got a fillip from demands for greater representation for janajati groups in the hill interiors of Nepal. His second stint began in the backdrop of the massacre of the royal family in the Narayanhiti Palace in the heart of Kathmandu on June 1, 2001. The Maoist insurgency had by then managed to spread and retain control over several parts of interior Nepal. King Gyanendra used this as a ruse to suspend Parliament, remove Mr. Deuba from power, only to appoint him later and then remove him again before declaring the return of absolute monarchy. Soon, the beleaguered monarchy lost support following Jan Andolan-2, paving the way for a 12-point charter among seven political parties and the Maoists and the conversion of Nepal into a constitutional republic.

Mr. Deuba, hailing from Sudoor Paschim, or the Far Western province of Nepal, had the political capital to survive the long exile that followed his third stint, mainly because of his ability to present his centrist politics as a solution for the country’s problems. In 2017, Mr. Deuba resurrected himself within the NC and took advantage of Mr. Dahal’s quest for power. He set up a government based on a rotating leadership that collapsed the very next year, paving the way for Mr. Oli’s second premiership. Now in his fifth stint as the PM, Mr. Deuba will still not have it easy. While Mr. Nepal had hitched his wagons to the opposition against Mr. Oli, he has not committed support for Mr. Deuba in the upcoming trust vote. As things stand, he needs the full support of the NC, the Maoists and the JSP if he has to win the trust vote without Mr. Nepal’s support.

In administration, Mr. Deuba faces tremendous challenges. Nepal has been ravaged by the COVID-19 pandemic. He will also have to deal with the southern and northern neighbours in a far more efficient manner than he ever did in the past. More than before, China’s influence is larger in Nepal and on the other hand, the Indian establishment is keen on normalising relations that have soured during Mr. Oli’s tenure.